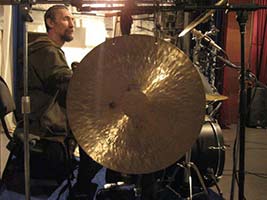 Rare case when the name of the album and immediately transmits the style of music, and its religious and philosophical orientation, and contains the name of the site, access to which, however, by means of conventional Internet do not get it. Percussionist cult groupe "Yat-Kha" Eugene Tkachev, acting under the pseudonym Opycham (White Shaman), decided to merge into a single musical space travel and its geographical religious quest.

Spiritual poems of Old Believers of the North side by side with shamanistic rites, and in the song "Upper Monastery" places completely erased the boundaries between Orthodoxy and Buddhism. For someone so wildly metaphysical mix might seem unforgivable blasphemy, but these boundaries do not seem quite so impervious to folksy peasant life. And we must not forget that the same principle of Yakutia Orthodox priests do not fight with the vestiges of the pagan mind, including their media guardians of ancestral start and key to their proximity to Mother Nature.

No wonder the sounds of nature are the main musical accompaniment for its long songs. Everything else takes a back seat in front of its greatness. Even percussion Tkachev only reinforce the message, which is contained in the texts. Where we are talking about repentance, Opycham monotonically batters in diamonds and in scene works like "Sodom and Gomorrah" into the act plates. But in the same "Sodom and Gomorrah" does not make the weather, they do not even biblical details, and the crackle of the fire and crows, which in this context represent the wrath of God.

The album is highly recommended for all those for whom self-development and spiritual growth - not just empty words, and the life principle. "For the living there is little - humanity makes robots", - stated in the epigraph to the CD-edition. If you are not completely turned into a soulless machine, but at least a cursory check out this record. And there, staring, and will tighten. After all, the album returns to the everyday life of a great Russian expression "work of God".