Review of the album "Chitinskaya Sloboda Folklore Ensemble: Songs of the Russian People" on the Hungarian portal Ekultura.hu

Do you like it or not, we are globalizing, products, ideas, people come and go, and we live in the age of constant change. We can love or hate this, we have many choices, but in my opinion we can do two things. On the one hand, we take advantage of the opportunity to get to know each other what is good and useful, and on the other hand, we try to acquaint the world with us with all the treasures we are proud of and interesting for others. I'm part of the world with me, after two years I'm still looking forward to seeing what new or old disc is playing near my player, musicians from all over the world trying to convince their talent. Thanks to this my column with reviews of music remains unchanged, because in it there are always a lot of good albums with great world music.

This double CD is not quite world music, it's cool folk music. So I immediately realized that a review of this album is simply obliged to be in my column.A few weeks ago I wrote about how important it is to preserve musical traditions that disappear from everyday life and from our memory because of the general trend of globalization.I do not think that this is very different in Russia, and although this process may be slow, but in the end everything will be monotonous, something like pop music - so we must do everything to save the treasure, such as this traditional music.

About Cossacks, I think, all have roughly the same vision: wild warriors, exotic hairstyles, long mustaches, people who used to be free residents within the boundaries of different empires.Now I'm looking at a more detailed history of the time that interests me, read about them here (an article in the English Wikipedia about Cossacks is fun to read.)On this double album, in addition to Cossack military songs, there are Russian folk songs. Founded in the city of Chita (the center of the region bordering Lake Baikal), the Folklore Ensemble Chitinskaya Sloboda performs a repertoire reflecting traditional songs from different regions of Russia, since many people from all over Russia came to this distant land, and they brought their traditions, their culture, their songs with them .

In this album with a long title (Songs of Russian people, Cossack songs / Songs of Cossacks and family Transbaikalia) you can hear real Russian music, rarely going with accompaniment, in which the emphasis is on singing, chorus and polyphony.There are only nine songs with musical accompaniment in the album, the rest are performed only by singing, but since they use polyphony, sometimes I felt that there were a lot more people behind the microphones than actually (Ben Kund River The Kuba River).I really liked the song (Oh, I'm small-boy), as well as military marching songs, like "We are the Cossacks of the Cossacks", accompanied by the accordion. These songs are a source of energy mixed with self-awareness and cheerfulness, which I rarely hear in folk music. Finally, I mention the famous song "Tersky chastushki", which pleases musical diversity.

To whom I recommend: Russian folk music lovers are obliged.

An album released in 2016 (Sketis Music)

The original text in Hungarian can be read here. 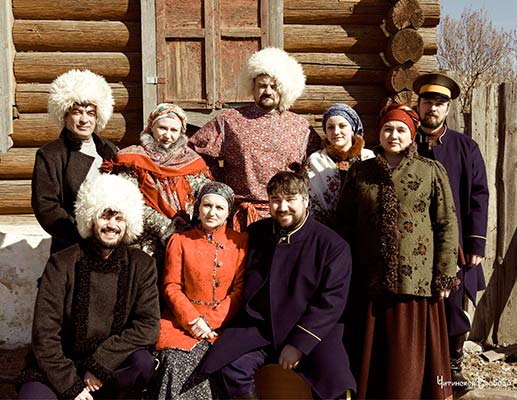 To listen or buy a digital album or CD of the folklore ensemble "Chitinskaya Sloboda": Songs of Russian people. Cossack songs / Songs of Cossacks and family Transbaikalia"you can follow these links: